What is creative coaching?

Many people I encounter don’t know what creative coaches do. They are wary of the offerings, they find the label strange or impossible. They see coaching as hacky and superficial and are reasonably not convinced.

They wonder that they’ve lived this long and things have gone fairly well, so why bother working with someone? Why not just figure things out on their own?

I’ve had a version of the following conversation with several people, so I thought I’d distill a few key bits out into something that I think currently defines how I approach my coaching practice.

Here’s how it basically goes. I am talking to a friend or colleague—Jen, in this case, an old friend—and they politely praise my efforts and then pause. “It sounds like sports coaching. I don’t get it.”

I will reply with something like, “There are some similarities, sure, and that’s where the term originally comes from. Looking together for opportunities to grow and succeed in a given context, for example. But it really deviates quite a lot from sports coaching.”

Jen: You don’t yell at me when I miss a shot?

Me: Uh, no. I do not. I also don’t have a master plan for the both of us. I don’t push you to “win” based on established standards. That’s the most obvious difference. Perhaps culturally we’re used to thinking of team coaches who guide everyone on the team to a predetermined goal. I definitely want you to succeed, and I’m committed to helping you, but how that happens is not something I prescribe to you.

Jen: I’m definitely thinking of some frantic basketball coach on the sideline screaming “Run number 3!!!!” and the team falls into formation.

Me: Nah, none of that. It’s definitely about your agenda. If I’m telling you what to do, I’m doing it wrong.

It’s not about the advice

Me: Giving advice is not my job as a coach. I mean, I may have a suggestion occasionally—your comment reminds me of a book called [xyz] because of [reason]. Have you read it?—and maybe we talk about the book a little bit. Or not, because maybe that book recommendation doesn’t feel quite right and you tell me as much. I’m not invested in whether or not you actually go and read [xyz]. Instead, I’m instead trying to dig into a topic with you to see how to examine circumstances in new ways.

Jen: So if you don’t tell people what to do, what do you do?

Me: It’s very largely about deeply listening to what our clients say to us and asking open-ended questions about what they’ve said. Creating a focused, safe, supportive space to examine obstacles and to create new perspectives about how to move forward.

Beyond that, working to create a plan of your choosing that you can take with you out of the coaching session, back into your life to work on. Coaching is typically done in a series of sessions, because change takes time, and so you will come back to the next session and I’ll ask how your work went. Maybe the work went well, maybe it didn’t—I hold you accountable to the plan you set. We talk about your successes or struggles, and what they might mean.

Jen: What if I want advice?

Me: You can hire a consultant for that. They’re useful, too; it’s just a different job. Consultants are experts in a certain topic and they’ll help you get deep and specific ideas created. Coaches work with you to help you shift your perspectives or your feelings around certain aspects of your life. I guess coaching is a lot about shifting and unblocking, whereas consulting is more about tactics and prescribing. This is a very simplified explanation, of course.

Jen: Ok, but this gives me another question. So you “listen deeply”? Isn’t that why we have friends and family? Don’t they already do that job? Why would I pay someone to listen to me talk about my problems? And wait, isn’t that therapy?

Me: Fair questions! Nope, it’s not therapy. Therapy is more about digging into the past and making sense of it, or dealing with illness or trauma. Every therapist is different, of course, but generally there isn’t a component in therapy around goal-setting and accountability-holding like there is in coaching. That’s why we often think of coaching as more forward-looking, because it’s about what we want to do next, about having outcomes. Therapy is tremendously valuable, but it’s less concerned with the future and more about unpacking the past. You’ll find many people who are both therapists and coaches, as well—they can offer the different services to clients as needed. Different jobs, both with merit.

Jen: So coaching doesn’t focus on the past at all?

Me: Not really. Of course the past plays into why we are all here in this moment, it’s a massive part of anyone’s narrative. We definitely discuss it so we can make sense of things playing out now, but all of that discussion serves moving you forward and creating new habits or perspectives in your life. I can’t speak for every therapist, so I’m just speaking generally here, but that’s how I have seen it often play out.

Jen: And what about friends and family? My sister is a great listener. She kinda feels like a coach.

Me: While listening is a cornerstone of coaching, it’s not all there is to it. Maybe your sister is your coach…but likely a trained coach will offer more to support you. They’re going to help you build skills to solve problems in new ways so when you’re done with the coaching engagement, you’ll have skills to take with you. However, it does sound like your sister is good at what we call holding space.

Jen: I’ve heard that term. It kinda makes me want to puke.

Me: (lol) I’ve had that feeling. It can be used a lot without much explanation. It means that basically when you’re talking or processing something, the other person consciously creates a little sanctuary for you to do that processing. While you’re talking, it’s all about helping you get clarity.

I don’t jump in and tell you how similar things have happened to me also. When you say something sucks or makes you sad, I don’t say, “Well, it could be worse,” or “Look on the bright side,” “or let me tell you my thing that was even more depressing.” It’s a space where you are honored and where you get to say and feel what you need to say and feel.

By asking good, simple, open questions, that space really expands between us as you process and think through things in new ways. It’s about building trust and mutual respect so we can both express and process openly as a working pair. It’s really pretty magical for both people, actually, but the coach has training in how to create this space consciously and consistently.

Which reminds me—while coaching is about you, the coaching relationship works when the coach is invested in the moment, too. It’s very much a relationship.

Jen: Ah! Ok. But I’m still not clear on why I’d pay someone to listen to me talk. I get that not everyone has a sister like mine who listens to them, but even a half-rate listener is still worth something, right?

Me: It depends what you want to do with yourself. Sure, I suppose half-rate listening is worth something, but I would ask you: is that how you want to grow and change in your life? By being half-listened to? You could also just talk to yourself on a walk or in the shower, right?

Usually coaching shows us that there’s more to a situation than is readily apparent, but you gotta do good, deep listening and question-asking to uncover that stuff. Half-listening is not going to get you there. Talking to yourself will probably not get you there. There’s candy, and then there’s a nourishing meal. Both do have calories, but they’re not the same. Coaching is like the nourishing meal.

Jen: So I have a hard time managing my schedule. But that seems like a silly reason to hire a coach. Like I can’t get my act together. You don’t coach people on stuff like that, do you?

Me: I totally coach people on stuff like that! If it’s something you care about, I can help you with it. Coaches can focus on wide ranges of stuff, and some have specialities, but consistent across all of good coaching is that it’ll help you see that there’s often more going on than meets the eye.

Usually, you have a problem that’s just not relenting, and you feel open to outside help. That’s the time when a coach is most useful–when you feel like you need something new, like your old bag of tricks just isn’t working.

So for your scheduling troubles, we might talk about what environmental or social or emotional blockers are in place for you regarding your schedule. We’d discuss what you really want to be doing, or what kind of preconceived notions of organization are you holding on to that we could examine and rewrite. Just a few examples.

If your schedule was a simple problem, you’d have solved it already. Therefore, it’s likely a bit more complicated than you realize. Coaches help people unpack these layers and look at them with fresh eyes and compassion. 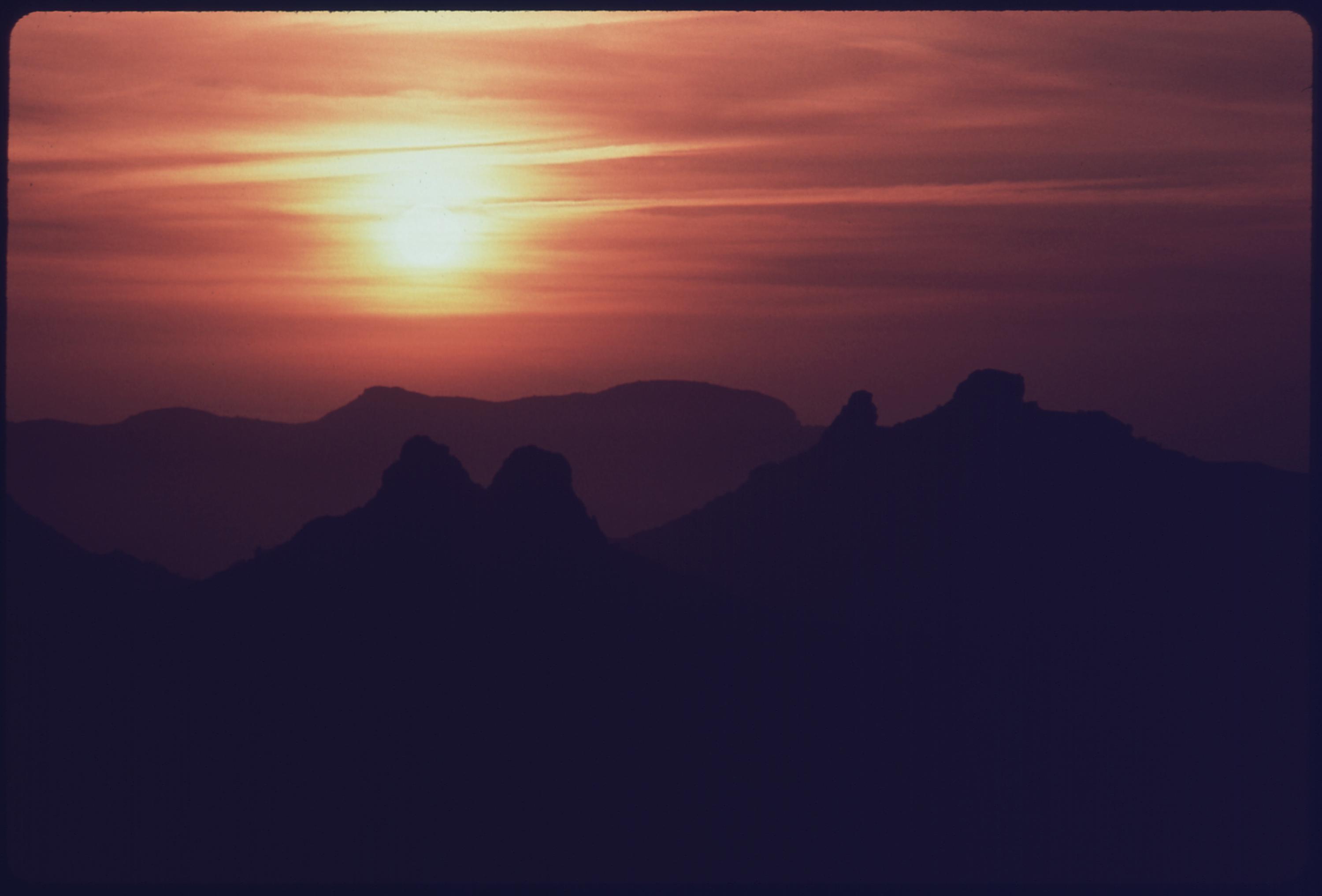 Sunset in the Santa Monica Mountains near the west edge of Los Angeles County, California, May 1975. Photo by Charles O'Rear.